A bit lost in the neighborhood

Before I get into it, I want to first say if you haven’t discovered The Thermals, and if you like power trios, you need to know them. But first a quick story about going to see a power trio as an old person. (I just turned 40, and I like poke fun at my 20 year old self calling that age old. Golly, I was stupid then).

My husband and I went to see The Thermals in Bellingham, and as the venue filled with people I was old enough to give birth to. Scott, who is almost a gray fox, leaned over and said, “Look at all the kiddies. We’re kinda old.” We were those middle age people we used to make fun of, so we stood a few rows back by the bar. Then The Thermals started playing, and oh.my.gawd.y’all.They were amazing! Later that night they tweeted, “Fuck Yeah, Bellingham!” and I’ve loved them ever since. That’s one thing about all ages shows that I like, and that I don’t get to enjoy enough of; the kiddies pay attention to the music. They don’t whine and moan about their jobs or their spouses or what’s on Facebook or use the show to socialize (which is why I hate Neumo’s, btw, despite how cool KEXP makes the place sound). The hipsters of a very large city to the south, ruin music venues unless it’s somebody totally loud like Bob Mould–then mercifully you can’t hear their conversations.

The kiddies, however, who have good taste in music just listen and learn.

So that brings me to listening and learning and my participation in Mike Caulfield’s Federated Wiki Happening.

And what I don’t know. And what I should have listened and learned before I started writing.

1. I should have listened to Your First Five Minutes in Smallest Wiki before I did anything. Sassy pants here wanted to see what she could teach herself. Teachers are the worst students sometimes. Case in point: I changed the title to my first page, and now I can’t figure out how to link it back. My inner editor–inner critic–wanted to change the words. I was also testing myself to see what I could figure out on my own. Turns out, not a whole lot.

2. Maha Bali inspired me to just get in there and bumble around. Totally impressed with that woman. She’s seems to have three hours in her day for my one of mine. I should have listed to the Orange Halo video because it explains more of how the thing works. I didn’t think it applied to me because I wasn’t seeing the halo.

3. I should have checked Ward Cunningham’s page because I missed the opportunity to attend his office hours. But I was grumpy last night. I decided to watch a really stupid movie and drink beer with above mentioned gray fox. Yesterday was an awful day at work, and unfortunately for him he sees the aftermath of these awful days more than anyone. My brain was mush by the time Mike posted the Daily. I saved the homework for the morning, thus I missed a hangout with Ward.

I actually liked the more informal nature of that video to the other edited more professional instructions in the other videos–those are cool too. I noticed my name between these two titles as Mike was talking:

See, I can make a sentence:

Shut up inner critic [with your] impostor syndrome. Alyson Indrunas [the real impostor is here and she’s often made fun of for a] Fetish of Technology. [The] Tree of Life [is] Bent over [dying when her ideas get killed by bureaucracy].

Focus on the Good: A Memoir

As I was reading Shut Up Inner Critic, all I could think of was Jens Voigt. “Shut up legs.” But it seemed like a smart-ass thing to write and I don’t want to be that jerk. I love his accent, and he still mixes it up with the young punks.

5. When I saw the word “Journal” on my little corner of the neighborhood: I immediately went into pour-your-heart-out-writer-mode. I suppose I misunderstood what I should be producing. I don’t see how anyone could use what I wrote on that first page–and now that page is now gone (or I’m too slow witted to find it).

6. I also think I’m a bit lost in the neighborhood. By not forking correctly, I feel a bit voyeur-like. And I made the commenting mistake, I think, that Mike suggested that we rethink. I’ll work on that. But if this was an actual neighborhood, somebody would’ve called the cops by now since I’m kind of a lurker. Or that’s what I was thinking this afternoon. So I took a break. Had lunch. Did some other work. 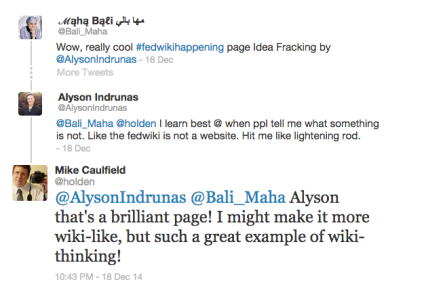 Seriously?! I suppose I’m a bit sensitive right now because I got the meanest rejection letter ever for an article that had been accepted as a proposal. I thought it was a go and I spent a very long time on it. When I sent the draft that I thought would be a collaborative effort with the editor, he wrote a very mean spirited rejection. He even sent a follow-up email apologizing for the tone of the email (boo, hiss, loser). So thank you, friends, you help me sew up a wound I’ve been nursing. And no, chump, I won’t send you any more of my work (boo, hiss, loser).

So now, I haven’t quite wrapped my brain around the forking and the wiki-like thinking.

But I Now I Feel Encouraged: A Memoir

Always learning about instructional design, educational technology, professional development, adult education, and writing.
View all posts by Alyson Indrunas →
This entry was posted in All The Things and tagged federated wiki, Memoir, Writing. Bookmark the permalink.