Queue the Everly Brothers. I’ve already lost that vacation-mode feeling. I’m on day three back in the office, so woe unto me fair maidens. Vacation, did you ever happen? So it goes. So it goes. And speaking of so it goes, Nick Lowe! Thank you Kevin Cole at KEXP, you are my favorite DJ at that station. I love John and his mornings, and Cheryl is beyond cool, but Kevin, I want to kidnap your record collection. You can come over too and play them for me one by one. Even if it takes us years to listen to them all. I’ll sit like a yogi and listen. We’d have a grand old time, I know it.

On my commute home I get KEXP for about 35 minutes of my time in the car, and I love to catch the last hour of Kevin’s show (when I get out of the office in time). He’s been my favorite music historian teacher for almost a decade now. I’ve been known to pull over so I can write down notes of trivia and songs while he’s talking about bands. Yesterday he played some Nick Lowe, and I found this beauty on the YouTubes. Eat your heart out, Beyonce and Madonna with your silly costume changes. Watch Nick do it and learn.

I’m going to do some lunch break bloggery about a story I’m re-purposing on my BookFedwiki. I’m also brewing up some ideas to blog about concerning the federated wiki, but that’s got to wait. I’ll need it to cheer me up later in the week. It’s only Wednesday. Today I want to write about rainy mountains! Yay!

Rain Is Not An Emergency

Let’s be clear: I understand the risk of planning a backpacking trip in the Olympics. My hiking partner grew up on the peninsula, and before I owned the proper rain gear of a PNW citizen, I had been rained out of a trip in the Olympics many years ago. It is a rainforest after all. I know that.

I have spent twelve rain-free days in the Olympics, so I know miracles can happen. On this particular trip in 2013, the forecast was not promising.

Unlike the slow autumnal shift with its lovely display of changing leaves, the seasons were about to change quickly. And we were heading into the backcountry. The glorious long days of summer sunshine had switched to heavy winds. The greyish white ceiling of clouds and rain descended upon the northwest right at the start of our summer vacation. Having a tradition of backpacking in September comes with its risks of abrupt seasonal changes, but nothing prepared for me the two and half inches of rain that fell in 26 hours in the Olympics.

This experience in the rain was not the pinnacle moment of this backpacking trip, but it was an adventurous beginning. A sign at the ranger station stated that “rain is not an emergency” but I beg to differ.

The trip had started off lovely. We took notice of the lowering clouds as we hit the trailhead. A mist above the Hoh River was like a long flat cloud that hadn’t joined with the rest of the sky. By the time we set up camp, small drops turned into bigger drops. Rain had arrived. We hiked on knowing an emergency shelter lied ahead on the trail.

If you have never seen a emergency shelter in the Olympics, let me explain how rustic they are. And depending on your location in the park, the better the accommodations, so to speak.

Rest assured that several generations of small ground creatures have taken residence prior to your arrival. Emergency shelters are like unfinished cabins where one wall of the four is missing and there are two benches that you could sleep on if you were not deathly afraid of small ground critters in the night.

Tami told me a story of mice crawling into her sleeping bag on one trip, and that sealed the deal for me; we were going to pitch the tent in the shelter. I know I offended her hardcore peninsula roots, but there was no way I was going to chance some furry disease carrier crawling into my bag. I do not like rodents. Laugh at me all you want. I’ll take it.

We decided to hang out in the rain shelter. Once the rain picked up, we busted out the cards , the whiskey, and got cozy. As the light grew darker, a family appeared at the ranger’s cabin near our shelter turned hobo camp condo. By then, we had taken over the shelter with our drying gear.

In hindsight, it was incredibly rude that we didn’t share our space, but I held fast to the fact that we were going to be in the woods for twelve days, so we deserved the dry shelter. Sorry tourists, I thought, first come first served! Plus I was too lazy and bit buzzed to pack everything up. The family took the porch of the ranger’s cabin and another couple pitched their tent in the field. The rain continued.

Nothing is harder than getting out of your dry sleeping bag to a morning downpour; a persistent rain was going to stick around. After packing up the camp, we had some oatmeal and coffee, we were already very wet before hitting the Hoh River Trail. Everything weighed more. The trail had turned into a small tiny creek. There was no avoiding puddles: the trail was one long puddle! A mile and half later, we got to our first rain shelter and we took a much needed break from the rain. That’s when we met our first couple who was hiking out to head to the sunnier North Cascades.

We decided to march on to the Olympic Guard Station. Thankfully when we arrived nobody was there. Walking around the abandoned camp, we took pictures of the various animal skulls that decorated the emergency shelter. Ten inches of moss covered all the rooftops. As we sat looking at the map, Tami admitted that she was starting to doubt our plans. I, on the other hand, thought that we should claim the rain shelter and camp out until the rain lifted. We were on vacation dammit! We’d talked about this trip for a year. We’re doing it, Mother Nature. Watch me, I thought. Right as we put our packs down, the rain fell in sheets.

For four hours, we watched the rain move in waves from light to heavy to deluge. Having spent a decade in the South, I’ve seen soaking hurricane torrential rains, and but this was unlike anything I’ve ever seen. For hours. We only left the emergency shelter to pump water and use the outhouse. The next morning, after 26 hours of waiting it out, the mist above the river returned, and we saw bits of blue in the sky. Everything was damp and despite our shelter hogging, our packs were heavy and wet. It was 8.3 miles to Glacier Meadows, so we got to it stopping only for lunch.

A dozen tourists, none of whom were from Washington, joined us on the trail and every single one asked Tami about her fishing plans. Her fishing pole invites conversation. People were friendly, the terrain was green and lush. So quiet. So rainy forest rainforest.

My life back home felt far away. I felt my shoulders relaxing into vacation-mode despite the weight of my pack and the ever changing cloud-scape above. Vacation-mode. A skill I’m quite good at when given the chance. 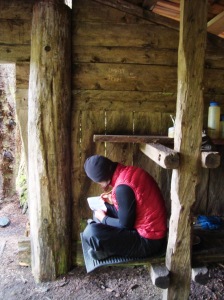 Post-script special note to Tami: photo credits, all you. And I know some of this story is out of order but one of my paragraphs got rearranged by the federated wiki thanks to a bug we call The YHOD, but I decided to keep it.  Thanks, fedwiki buggery, I thought, for the editor suggestion. Fuck it, I said, who will know? But then I remembered, it’s your story too.

Always learning about instructional design, educational technology, professional development, adult education, and writing.
View all posts by Alyson Indrunas →
This entry was posted in All The Things. Bookmark the permalink.