There is this scene in David Peace’s Red Riding Trilogy that I can’t quit thinking about.

The police are celebrating a horrendous victory. Of Corruption. Of Capitalism. Of capitalistic corruption. Patriarchy. Privilege. It’s a horrifying scene that popped into my head when I heard that Clinton had called to concede to The Monster who will be our president for the next four years. In that scene of The Red Riding Trilogy, the cops raise their crystal glasses filled with expensive brown liquor. Defiant. Confident. Cocksure.

They say with great jubilance: “To The North. Where we do what we want.”

In four days, two hours, and twelve minutes, I am moving back to Bellingham, Washington. To the north. Where I went to college. I’ve negotiated to work remotely for the same company, and the mister will be an online teacher. This is it; we’re heading back to The Ham.

Prior to this horrifying election, I was going to write about my joy and elation during this monumental time in our lives. We blue collar kids are going to purchase a little place of our own. Off the bike trail. Near the bay. Close to the best mountain biking in the lower 48. Killer hiking. Wonderful snow. Safer road cycling. Our friends. Our bike family. Our community. Our old life we have missed so deeply over the last year. Again. To the north. Sweet, sweet Bellingham. The only place I have ever felt at home.

On the eve of the election, I walked around northeast Portland with my dog, and I deposited some of those books in the little free library boxes. I’m tired of moving them. I won’t reread any of them. Why carry them again? On the eve of the election, it felt like a nice thing to do. Generous. I laughed at my joke of putting my most radical books in the boxes where I found Scientology books. Bibles. Wedding planning books. I was the little Jill Apple Seed of Banned Books, I thought. Screw you, Xenu, I’ll poison the minds of children with literature, I thought. Oh look, a book on how to bring Jesus into your marriage! Here’s The Fire Next Time by James Baldwin to balance the bullshit, I thought. It seemed like a nice thing to do. Lighten the load as we pack up the moving van to head to the north. Again. 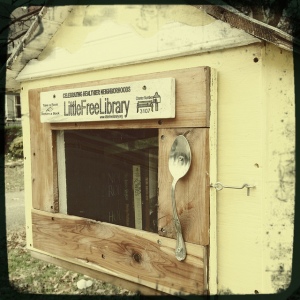 Prior to this horrifying election, I was going to write so much about open education, pedagogy, teaching, learning, bikes, joy, life. I have written so many posts waiting for clarity. Waiting for connection. Research. Substantiation. Writing to do. But no. I admire those of you who have continued with your work.

Two weeks ago, I was sitting at a bar and some stranger-man started talking to me. Here we go, I thought. I just wanted to get out my hotel room and type someplace else. Fuck.

He works “In Tech” too, he was so eager to tell me. He asked me questions. I was a bit drunk. Bored. Sarcastic. He was blunt. Direct. Dull. Told me he was lonely. Oh dear. I was not.

But I was curious about this Silicon Valley spawned wunderkind. A perspective from a man from “my field.” So very opposite of the men I usually talk to. In tech. These days. A supporter of The Monster that nobody thought could get elected just one week ago, I’m sure. I like to debate. It’s good to know the perspective of others. I thought.

He then offered me some career advice. Here we go, I thought.

“You know, a woman like you shouldn’t ask so many questions so quickly. You seem sharp. Bright. Men like that in their partners. Like your husband, I’m sure. But when you work in technology, it’s best if you don’t come across so smart. It intimidates men in tech. You could go really far while you still have your looks. Trust me. You should pretend you’re not so smart.” He ordered another bourbon. Asked if he could buy me one.

WTF. Prior to this horrifying election, this would have been just another story from this sometimes horrifying “field.” Business as usual. Business. As usual. Strangers I’ve met in hotel bars rarely become friends. How do I “hold on to my looks?” Will they fly away in the middle of the night? How does one “seem sharp?” You either are or you aren’t, right? What does it even mean to “go far” in this field? Why do stranger danger men always want to give me career advice? How do I pretend I’m not smart to dumb-asses? In tech.

Really, I just want to be left the fuck alone so I can work with teachers. A Memoir.

And I’m lucky, I know. Privileged. Lucky. The men I trust in this field would dislike that guy too. Find him repugnant in the business as usual. In Tech. This is I know. Prior to this horrifying election, I would have filed that conversation as another sociological experiment while I’m traveling. Fodder for the stories I tell. Fodder for the memoir of sexist interactions that have punctuated my life. My career. My business as usual. Try as I might, I can’t write anything of worth lately. I think of this man feeling victorious right now. I think of those cops in Red Riding Trilogy: “To the north, where we do what we want.”

But then somebody very close to me shared that he can’t give another four years of his life to depression and rage like he did during the Bush The Second years. During the Years of The Gipper. He can’t let the things he can’t control paralyze him. Again. He’ll do what he can where he can. He’ll keep doing. What he can. Where he can. Yes.

This horrifying election. I know people who wrote in candidates. Voted third-party. Didn’t vote at all. I love these people. They have their reasons even if I don’t agree. Even if I’m horrified by their choices. I’m easily exhausted when I try to wrap my mind around the results. I can’t find the optimism that I had when I blackened the arrow on my ballot, but I will. I can’t find a way to understand this election. I can’t find a way to understand a lot these days. That asshole at the bar that I described above?

Him I understand. Crystal clear. And I hate that he and his keep winning.

I have to live and work to see them lose. Someday.

Until then, I’m going to pack. Think. Work. Write. Reflect. Rewrite. Redirect. Reroute to the north. Back to my beloved Washington State. Home. Bellingham. Bellinghome. Yes.

Always learning about instructional design, educational technology, professional development, adult education, and writing.
View all posts by Alyson Indrunas →
This entry was posted in All The Things and tagged A Memoir, BookReviews, Jobby Job Memoir. Bookmark the permalink.

5 Responses to To The North