A few plane rides ago, a ball of yarn flew out of my lap just as we were landing.

The weather was awful and there had been turbulence for most of the flight. Just as we were about to touch down, the plane jolted forward and my ball of yarn went flying.

I was in that row right behind first class. You know that row.

That first row behind first class–the loser row–where you can smell all the mediocre food they don’t bother to serve to you. The thin curtain separates you from The Swells. The row where you can hear the ice cubes in the weak yet free drinks they don’t serve to you. It’s not the worst row on the plane–that’s the one by the bathroom–but it’s not the best. Honestly, I don’t mind this you-are-not-first-class row. You get to deplane faster than those who sit in the back, and you get some sort of treat in a shrink wrapped box. A free drink or two. You get to ride next to hardened work travelers who aren’t interested in talking with you. Nobody is on vacation and ready to make friends. My ideal seat mates.

On this particular work commute, I sat there knitting quietly during the entire trip, and just as we were about to land, the ball of yarn flew from my lap and pin-balled between the four rows of first class passengers. It zigged and zagged between people’s feet and carry on bags. Rolled continuously like it was guided by an invisible cat who batted it around through several rows.

I sat there stunned. Helpless. Shocked. With my needles in my hands.

I was in the middle seat so I had to crane my neck towards the aisle to see what had happened to my yarn. Crap! The yarn was dark purple, very thin, and kind of delicate. Expensive. It blended in perfectly with the airplane carpet. I tried to stand up to retrieve it and the flight attendant yelled at me that I was in violation of the FAA. Ma’am, you need to take your seat, she said.

I side-eyed her with all my rage. Sat down hard like a scolded toddler. 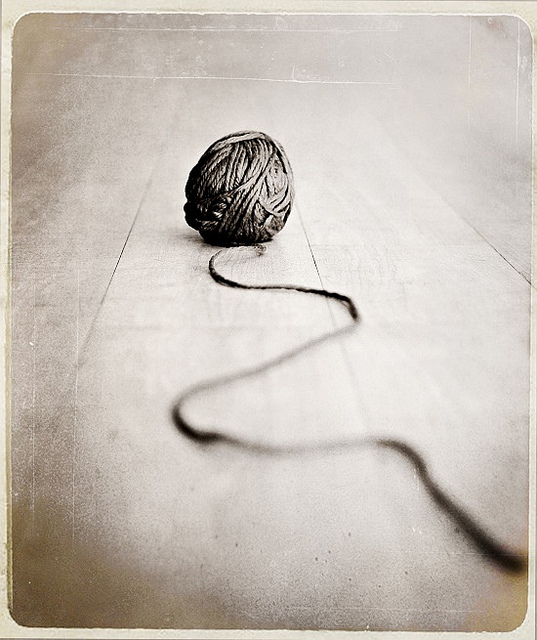 Just then a guy in the front row held up my ball of yarn, and said, “Who’s is this?”

Mine, I said. I’m so sorry. I held up my needles as proof. The yarn got really tight as he held it up the air. Dammit!

He reached into his pocket and took out a small nail file to cut it. I was wide-eyed. Stunned silent. Just then three women in first class yelled NOOOO in unison.

What. The. Hell. I thought. How did that guy get on board with that aorta slicer in his pocket when I got felt up by the blue gloves just to confirm that the underwire in my bra was not a semi-automatic weapon. TSfuckingA.

NO! Another woman said. Wait. Let’s untangle it, slurred a woman who drank a bottle of merlot by herself glass by glass during this flight. She drank three glasses to my one. I had already decided I liked her before this yarn debacle. Her lips were as purple as my yarn.

The guy next to her said, “My wife is a knitter. You don’t cut the yarn unless you have to. Let me help. We can do this.”

Then the woman who sat next to the Nail-File-Yarn-Discoverer took charge. “Give it to me,” she said.

The man beside her said, “Send it this way.”

“No, pass it under the seat not over.”

This type of exchange went on for what seemed like eternity to me but was probably more like five minutes. If I could’ve made myself invisible, I would have.

These complete strangers worked out a tangle of yarn between feet, purses, carry-ons, flight blankets, and seat rows. They laughed. Helped one another. Corrected one another’s next move. Touched hands as they passed the yarn. Looked each other in the eye as they passed the ball under their seats. Stretched in odd ways to guide my wayward yarn between their legs. Coached the next row of yarn guides from their own unique perspective. Bossed one another around. Turned into a team right before my eyes.

I sat there helpless since I was on the hit list of the flight attendant. She seemed annoyed that she had to stop reading her Kindle to keep an eye on me and Team Yarn. She was right to watch me.The second she looked down, I was going to get up. She had my number.

I did not like her as much as the Merlot Drinker.

By the time the yarn made it back to me, it took almost a dozen people to help untangle the fiber strand. When the last person handed it back to me, the entire first-class broke into applause about their work. They laughed. High-fived. A few raised the roof. The Merlot Drinker Whoo-hooed.

I sat there mortified and somewhat in awe. I packed up my yarn carefully. I’d untangle the mess in privacy of my hotel room later. Said thank you. One person asked me what I was knitting.

A scarf, I said. Felt mildly embarrassed that I wasn’t creating something more complex. They didn’t seem to care. They were quite pleased with themselves. Team Yarn got the job done.

Then the plane bell rang. People unclicked their seat belts. Grabbed their bags. Deplaned. Joined the masses of bodies in movement. Strangers all on their way somewhere.

I walked to my next flight in silence. Marveled at how my mistake brought the joy of collaboration to a few rows of traveling strangers.

I finished that scarf yesterday shortly after reading an airline offer on my phone congratulating me on flying so many miles this year. Thanking me for being a valued customer. You flew 123,047 miles this year. Congratulations, the algorithm told me, hope to see you in 2018.

That scarf was a project that I carried in my purse for most of 2017. I carried it to several different states. Airports. Hotels. Restaurants. Bars. Libraries. Universities. Colleges. Parks. Train stations. Taxis.

Just a thin gorgeous thread of purple. Garnet stitch row by row. Size ten needles. Simple. Something to do when I was too tired to work. Too stressed to sleep. Meditative. Easy.

Thinking about that flight now, it makes me laugh. Spontaneous joy. How absurd life can be. I might be missing an opportunity here to say something about the kindness of strangers. Spontaneous collaboration. Team work. Empathy. Generosity.

Maybe this is all an anecdote for a larger point. Someday.

Originally I thought I’d gift this scarf to somebody, but after all that work from the strangers in first class, I’ve decided to keep it as my own.

Always learning about instructional design, educational technology, #OER, professional development, adult education & writing. Travels to talk about Open Education during the workweek. Advocates for more girls on bikes during the weekend. Bike racer w/ @queensofdirt A Memoir.
View all posts by Alyson Indrunas →
This entry was posted in Uncategorized and tagged A Memoir, Knitting, Writing. Bookmark the permalink.